There have been several reports this year about strange black rings of smoke appearing in the skies over different areas of the world. The most recent case was in northeast China where beachgoers spotted a large ring of black smoke hovering in the sky over the sea. Check out the footage below if you haven’t seen it before.

I have seen photos and videos like this in the past but there seems to be an increase in these sightings this year. Here are some examples of black smoke rings seen around the world… 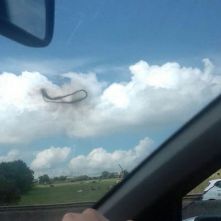 Some people think these rings are portals to another dimension or some type of UFO. I don’t think they can be counted as a UFO as it is clearly not a physical object. I do think in this instance that there is a rather mundane answer as to what these things are. The fact is, these type of smoke rings can be made by firing smoke through a cylindrical object. A bit like when smokers show off and blow smoke rings! You can see this in the video below which was recorded at the Burning Man festival.

We do know that in at least some of the instances where smoke rings have been spotted, there has been a festival or carnival of some kind taking place nearby. This was definitely the case in China where there was a performance art piece taking place in a nearby playground. There was also a World War Two reenactment taking place in Yorkshire near where the smoke ring was spotted in England.

If people can prove there was nothing similar taking place where other rings have been spotted, then maybe there is room for a different explanation, but with all things taken into account, I think we can assume for the time being that this is nothing paranormal.